10 Questions From A Young Actor

I recently did a commercial for Lipitor playing a mom with a husband and two sons.  My younger TV son, Bridger Palmer, asked if I’d participate in a class project.  I said, “yes” and he sent me the following 10 questions to answer.

As you would imagine, I discuss marketing in my answers.  If you’ve been reading my blog, you know what a stickler I am about the necessity of marketing yourself to forward your career.  That goes for any career you may embark on, but this particular interview is geared towards actors.

I hope you enjoy it!

1. Tell me about yourself & the highlights of your career?

My name is Anne Marie Howard and I’ve been a steadily working actress for over 32 years.

I’m the oldest of 5 kids, and was born in San Diego at the Balboa Naval Hospital where Dad was a dentist in the Navy.

When I was 2 years old, we moved to Ottumwa, Iowa where Dad’s parents helped him set up his dental practice, and where I got involved with the local children’s theatre.  I knew when I was 4 years old that I wanted to be an actress.  My mom put me in dance class because she said I walked like an elephant and it would help me be more graceful.  The first time I appeared onstage in a dance recital, I loved it!

When I was 14, we moved to Davenport, Iowa and I was in every high school production.  We did one musical and one dramatic play every year.  I loved playing Anne Frank in the Diary of Anne Frank and Fanny Brice in Funny Girl.  My first professional paycheck came from understudying Hodel & Chava at the Circa ’21 Dinner Theatre in Rock Island, Illinois during my senior year of high school.

At 18, I moved to New York City to attend the American Academy of Dramatic Arts and embark on my professional acting career.
There are so many highlights in my career, but my favorite highlight was being cast as Nicole Love on the NBC soap opera, Another World.  I was flown to New York (from Los Angeles) to audition, and when I got the role I was very excited.  I had never considered doing a soap opera, but my acting teacher, Milton Katselas, suggested that I could hone my skills and learn a lot from working steadily.  He was right.  I learned so much working 3-4 days a week for three years on the soap operas.  It also opened a lot of doors for me.

Another highlight was working on The Weather Man with Nicolas Cage.  I sat beside Bryant Gumbel at a news desk (at a real news station) in Chicago and co-hosted “Good Morning, America!” with him.  That was a real thrill, especially after watching him on the Today Show with Katie Couric and Matt Lauer all those years.  In The Weather Man, Bryant & I co-hosted the morning talk show, participated in a cooking demonstration with Wolfgang Puck, and rode on a float in a parade with Nicolas Cage.

And yet another highlight was becoming a Spokeswoman in Television Commercials and a Host in Infomercials.  I worked on big campaigns (involving multiple commercials, voice-overs & print ads) for Maalox, Ditech, and the National Association of Realtors.  I’ve interviewed Donald Trump, Melissa Etheridge, James Cromwell, Vanessa Williams, George Foreman, Frances Fisher, CEO’s, medical doctors, scientists, and many others.
2. What is most rewarding as an actor?

3. What is it like to be an adult actor?

I really enjoyed all the theatre work I did in Ottumwa & Davenport, Iowa from the age of 4-18, but moving to New York City to attend the American Academy of Dramatic Arts right out of high school was thrilling!  And by the time I was 20, I was making six figures as an actress, mostly from national television commercials!

They say that it’s difficult for women over 40 to get work, but I’m here to tell you otherwise.  I’m working now more than ever, and the roles are deeper and richer.  It’s also wonderful to receive direct bookings, which means that I’m offered roles without having to audition for them.  I love working with the same directors over and over again.

4. What is most aggravating?

The most aggravating thing is not to have a crack at roles that are being handed out to the names and/or celebrities.  These actors are sometimes not right for the roles they’re offered, but because they’re well known and will bring in viewers, it’s worth it to the producers to cast them.  It helps them market their film.

It’s also aggravating to be put on avail and know that you’re one of only a few who are in consideration for the job, only to be released a few days later.  When this happens a few times in a row, it’s painful.

5. What should someone know about considering a career in acting?

I have a strong belief that, if you want an acting career & longevity in show biz, you need to market yourself and spend time every day moving your career forward.  An acting career requires networking to get the auditions and book the jobs, and that’s not always the fun part.  When you find a way to make the ‘business’ part of acting enjoyable, you will succeed.

Know that it can take awhile, possibly years, before you start working steadily.  You may need a part-time job with flexible hours in the early stage of your career.  Invest the money you make wisely.  Be sure to keep your headshots, resumes, and demo reels up-to-date, and upload them to the casting websites: LA Casting, Actors Access, Now Casting, IMDB, Casting Frontier, etc.  Take classes & read the trades.  Know what’s going on in your industry.

6. What would people be surprised to know about acting?

Once you’re on the set working, you’ll find that acting actually involves a lot of sitting around & waiting.  Hair & make-up can take over an hour if you’re a woman, and you may be dressed and ready to work, but sit in your trailer for hours waiting to be called to the set.

Also know that many actors audition for fifty commercials or more before they book one.  This means driving to auditions, going to callbacks, and being put on avails, only to find out someone else booked the job.  But it also means that you’re doing something right if you’re getting callbacks and avails, so hang in there and keep a positive attitude.  Once you’ve booked a commercial, you may be asked to arrive on the set as early as 5am.  Sometimes the day will go fast, and other times you may spend hours waiting, or working in front of the camera which is the fun part.

Market yourself to increase your auditions.  Don’t just sit around and wait for your agent or manager to call with an appointment.  If you really apply yourself, you’ll be able to make a living as an actor.

7. With the unions merging, what do you see for the future of acting?

I believe that SAG-AFTRA will be a more powerful union, a union that has the ability to negotiate good deals for its actors & stay ahead of the curve with new media rates.

I don’t think that we’ll notice too much of a difference, other than the fact that AFTRA won’t undermine SAG by offering a better contract to the producers, or vice versa.  The merger has definitely made the producers and studios wary, and put them on the defensive, as everyone gears up for the first contract negotiation in October, which is the commercial contract.  My commercial agent has noticed that there’s more non-union work casting now.

8. What age did you start acting?

I started acting at the age of 4.  I was in the musical, Carousel at the Ottumwa Heights Community College in Ottumwa, Iowa.  I played the youngest of Mr. & Mrs. Snow’s children.  I had been in a dance recital, but this was the first time I had an acting role on stage.  Being onstage feels like home to me.

9. How many jobs per year should someone expect to book?

It depends on your physical type and your age range.  I give myself new goals every year.  This year I expect to book 2 infomercials, 2 commercials, 3 films, 4 television guest-star/co-star roles, and 10 voice-overs.  That’s been an average for me over the past 15 years, with some years being better than others, of course.

10. At what point did you consider your career a success?

I considered my career a success when I was able to quit waiting on tables in New York City.  I worked at Maxwell’s Plum in 1979, and quit in 1980 when I got my SAG card for a Fruit Fresh commercial with the Cunningham & Marx Advertising Agency.  Waiting on tables was my last non-acting job.  Ever since then I have my made living as an actress.  That was 32 years ago! 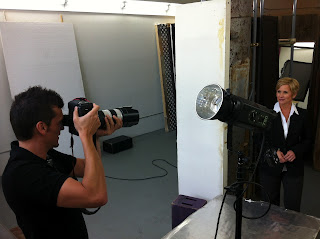 Taking my own advice and shooting new photos with
Shandon of Amazing Headshots.
I'll have the new business shots on my website soon!
www.annemariehoward.com
Posted by Unknown at 1:52 PM

Welcome to Queen of Everything Ink

My company name is Queen of Everything, Inc which is how this blog got it's pen name. I've been working as a professional Actress for over 30 years and started this blog to offer marketing advice for actors. I'm thrilled to find that so many people are benefiting this information. I enjoy answering your questions. Keep them coming and pass the info on to your friends!